Do you know the difference between a crepe and a galette? Crepes are usually made from wheat flour and have sweet fillings, while galettes are made with buckwheat flour and are savoury.

A few weeks ago, I was invited to sample the crepes and galettes at Creperie Suzette. I eagerly accepted and decided to use the opportunity to catch up with my friend A.

After a quick browse of the giant blackboard menu, that is divided neatly into galettes and crepes, we picked the La Tasmanienne ($13) and La Pekinoise ($15) for our galettes. As for the crepes, I go slightly off menu by replacing La Nutella Banane ($9) with strawberries, while A picked La Pomme Cannelle ($9). Don’t worry if your French is a bit rusty, I’ll translate what each dish means below (thank you Google translate). 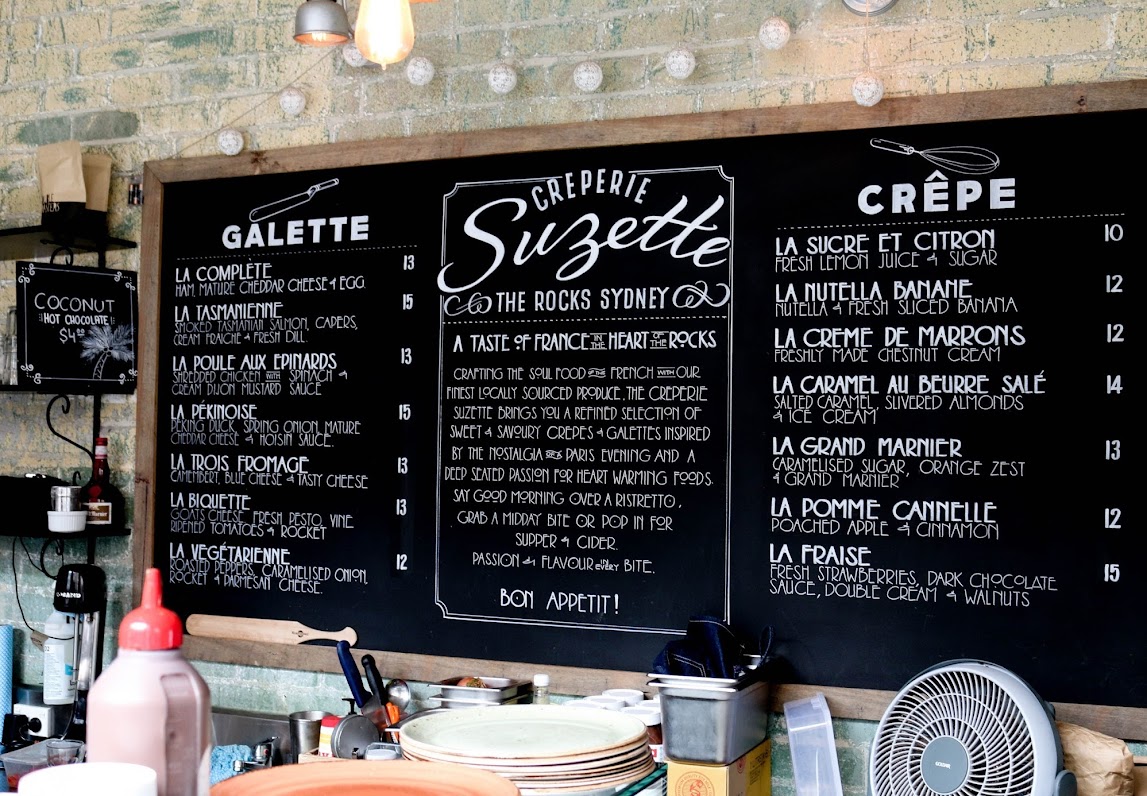 La Tasmanienne translates to The Tasmanian and it features smoked salmon, capers, creme fraiche and fresh dill. The cheesy base pairs nicely with the generous slivers of smoked salmon. The piquant flavour of the capers helps cut through the heaviness cheese. 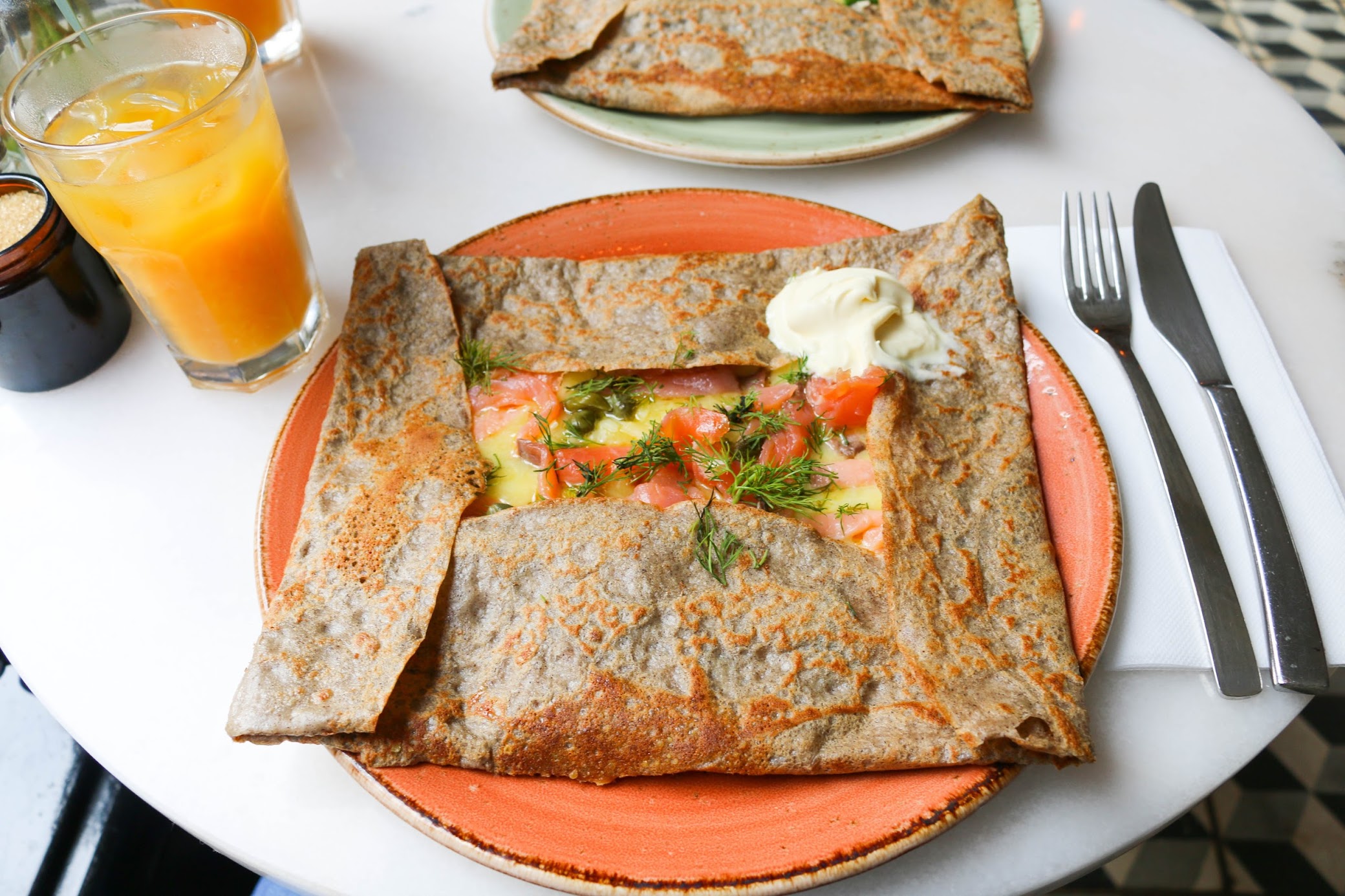 La Pekinoise means The Pekingese, which refers to Peking, the older spelling of Beijing. The familiar combination of Peking duck, spring onion and hoisin sauce does remind of Peking duck pancakes. However, the mature cheddar cheese and buckwheat batter are undoubtedly French. The odd fusion fortunately proves to be more nouvelle cuisine and less food faux pas. 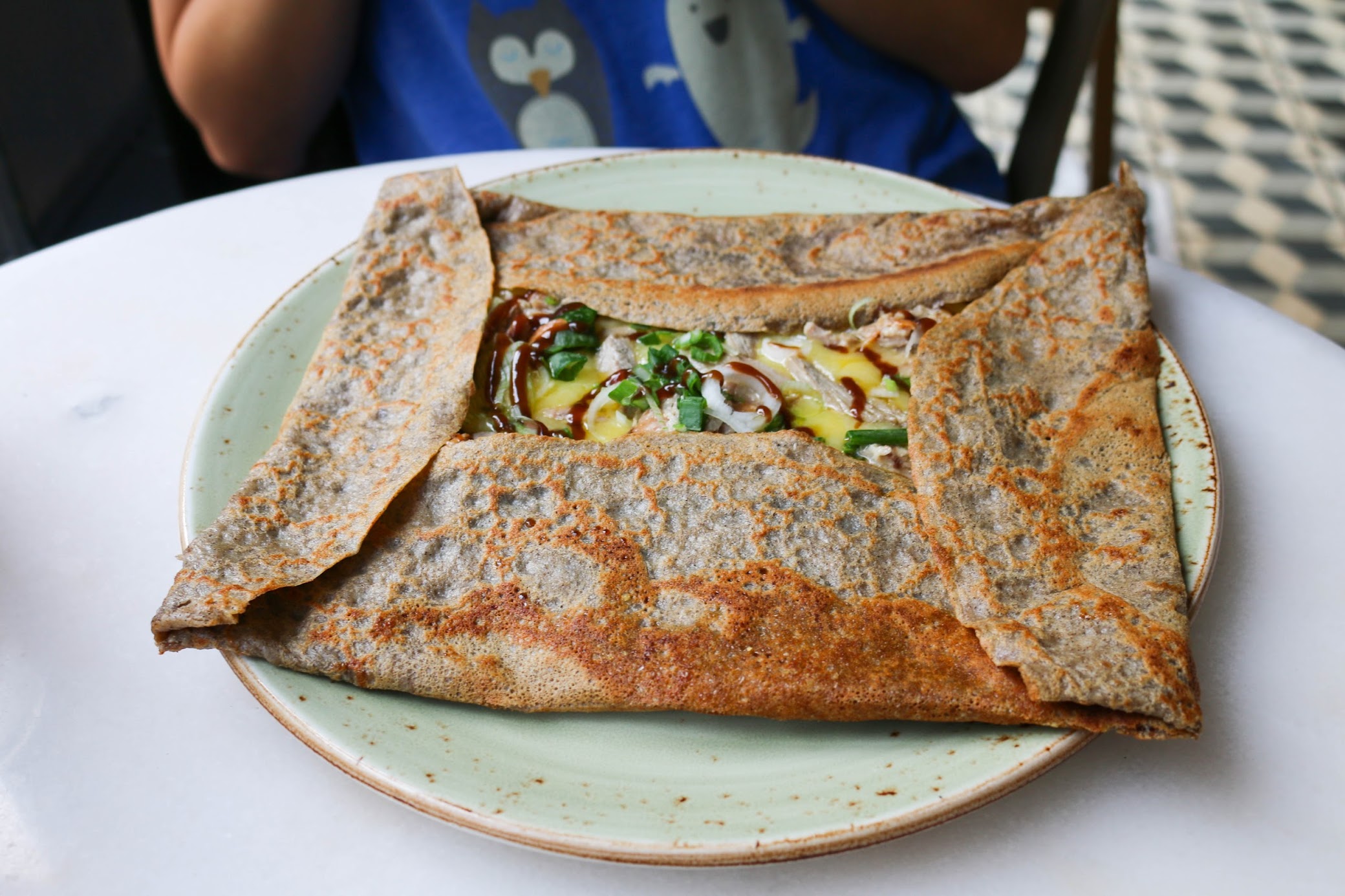 After we tackled our extremely filling galettes (my friend A struggled to finish), we proceeded with our crepes. When I was ordering La Nutella Banane (Nutella banana), I was offered the option of having strawberries instead of banana. As I’m not a fan of bananas, I gladly accepted the modification.

Seriously, bananas in their natural form just don’t appeal to me. The flavour is muted and the texture can range from mushy to overly firm. Though, I am a sucker for deep fried bananas. Anyway I digress.

Unsurprisingly, the Nutella and strawberry crepe was rich and decadent. A’s order, La Pomme Cannelle (Apple Cinnamon) is a much lighter dish with poached apple and cinnamon as the filling. 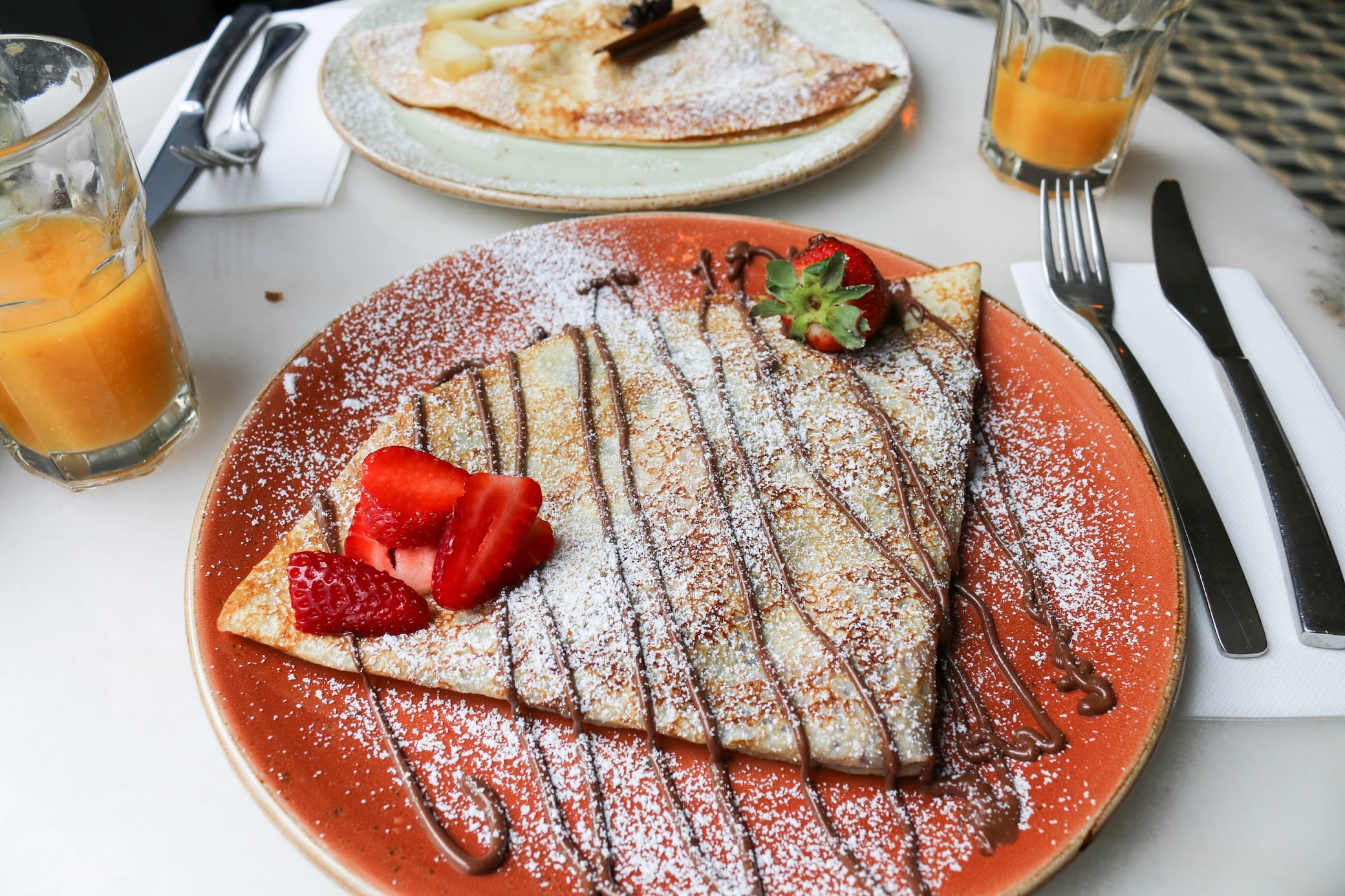 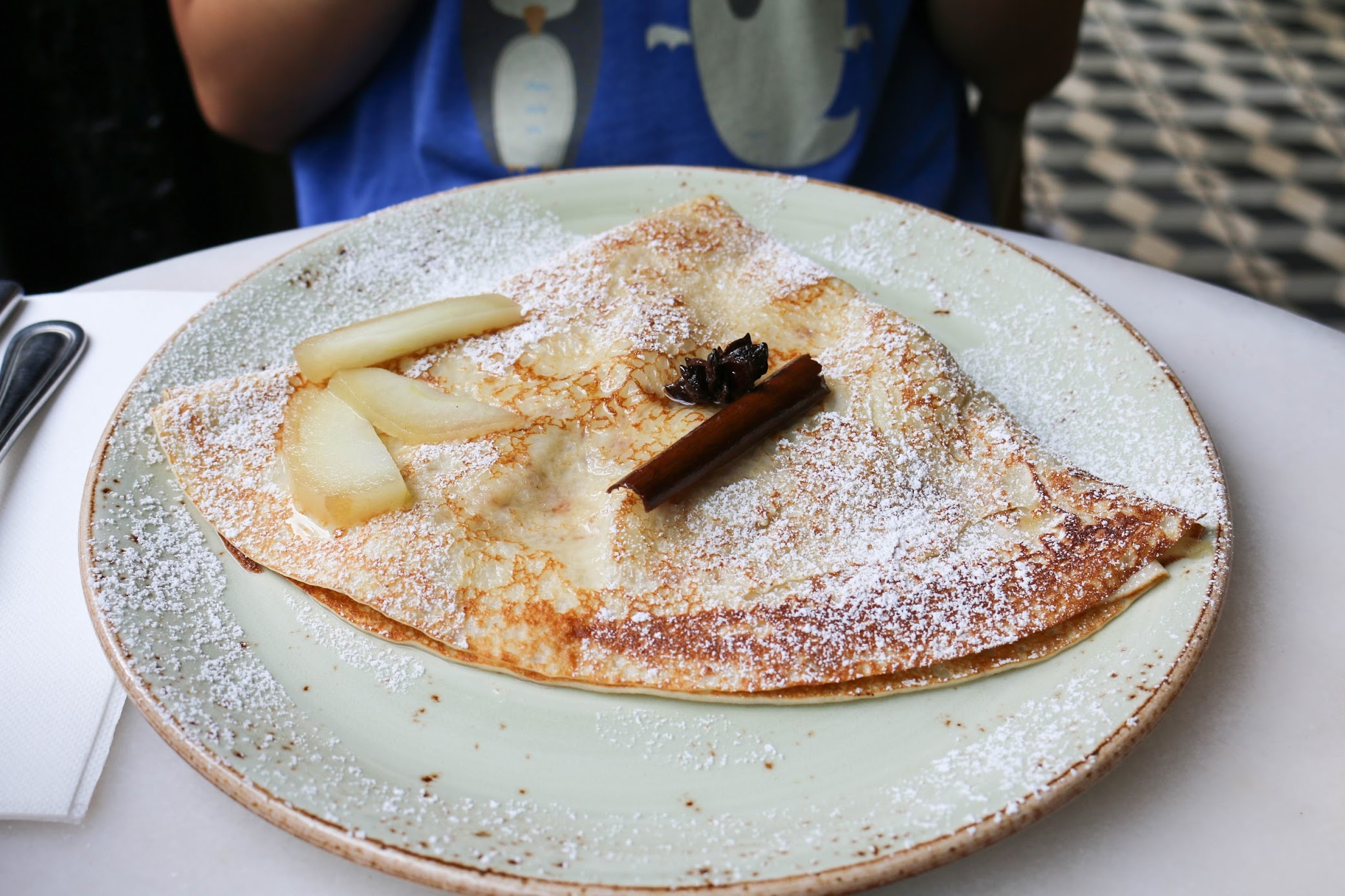 Coffee is definitely the staple drink at Creperie Suzette. But don’t fret if you are not a coffee drinker as there’s also tea, milkshakes, soft drinks and juices on the menu.

The staff were professional and thoughtful. I was impressed that the two waitresses not only served the galettes and crepes but they were the ones that made them!

The creperie has a charming rustic feel, think tiled floors and exposed brick walls. The majority of the seats are on a slightly elevated level with dim lighting. If you want to take photos of your meal (or selfies), make sure you grab the windows seats that have ample natural light.

Creperie Suzette is an ideal place for a catchup over coffee or a satisfying lunch. 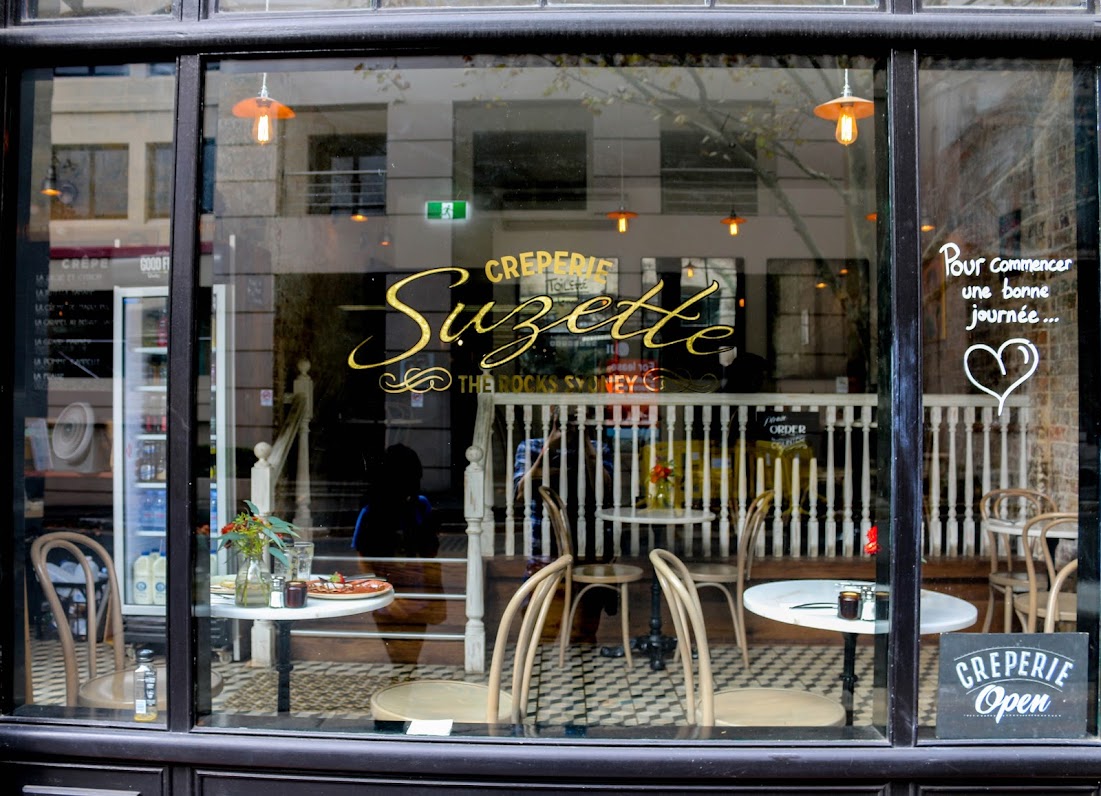 Whenever I am invited to try a restaurant, I always apply the “would I have spent my own money on that meal” rule. It’s safe to say I would be more than happy to dine at Creperie Suzette on my own dime. Head to Creperie Suzette for a fresh French feast that won’t bust your wallet!

This review was based on an complimentary meal.